Categories:
In January 2011 set myself a half-day project to write music specifically for shuffle mode – making use of randomness to try and make something more than the sum of its parts. The ever-brilliant Russell Davies sowed the seed of the idea in my head. Over an hour or so, I wrote a series of short, interlocking phrases (each formatted as an individual MP3) that can be played in any order and still (sort of) make musical sense. Here’s a video of it playing in iTunes:

You can download a 6mb .zip of the tracks here if you fancy a play.

Harmony
My first thought was that if there was no beginning or end to this music, using a drone would probably make sense – set one constant, unchanging element and pivot everything else around it. I slapped together a Spotify playlist of references I could think of, then got sketching. 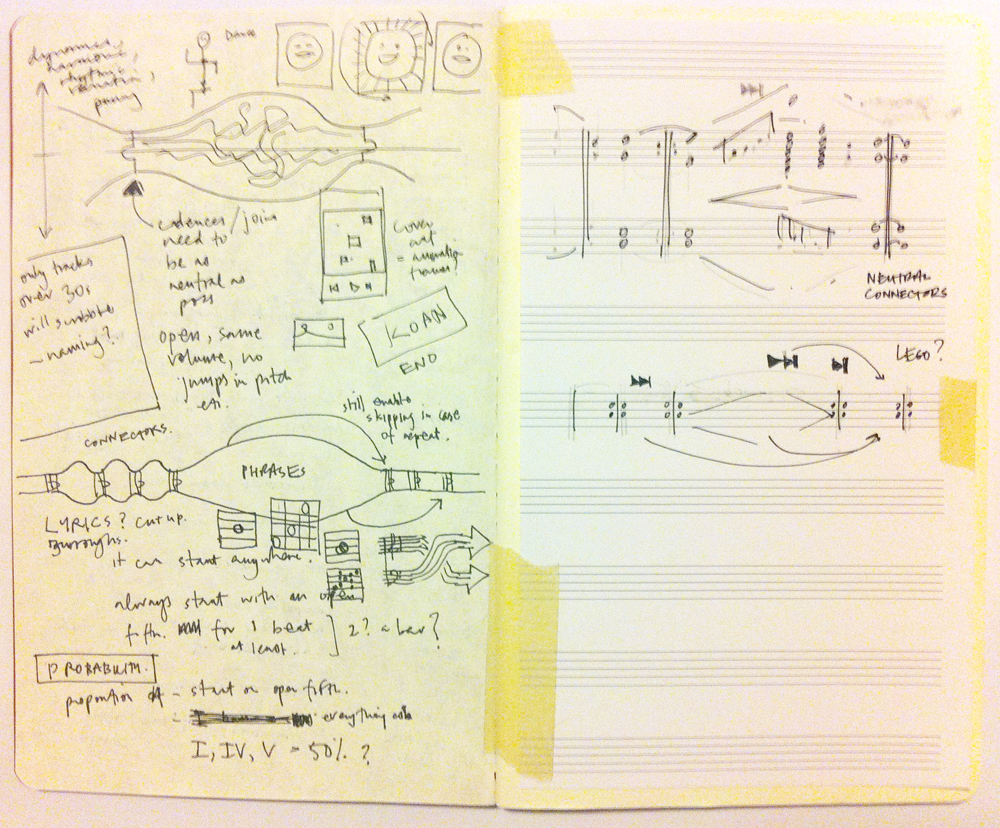 Pen and paper before continuing sketching in sound using Logic

Common cadences and chord progressions don’t work very well when trying to write in a non-linear way: the best approach I came up with in an hour or so involved using neutral, expressionless fourths and fifths as ‘connectors’ at the beginning and end of each phrase, then using more expressive colours in the middle of longer phrases.

Artwork as animation
Formatting phrases as tracks means that you can use the artwork embedded in the ID3 tag almost like a frame in an animation. Again, loads to explore here. If each phrase is formatted as a separate MP3, cover art can be slowly animated.

Meter
To keep things interesting, I avoided the standard 2, 4, 8, 16 bar structures and just wrote bits freely, at random lengths. The tempo was important to get right, as I wanted to be able to play with doubling and halving speed now and again. I used a constant off-beat high hat, and a kick drum playing intermittently, at double- and half-speed, with heavy syncopation. Loads of dubstep is pretty much built on this technique. Mount Kimbie do it brilliantly.

Making use of glitches
On an iPod Shuffle, you tend to hear a bit of clicking when you skip tracks quickly, so to make these transitions less noticeable, I ended up sampling the skipping noises and using them as rhythmic and textural elements. This technique has been used loads over the past 20-odd years in genres like glitch and minimal techno. There’s 60-odd years worth of audio production techniques to explore here – someone’s bound to have done a PhD thesis on it.

The skip button as instrument
During my time at Last.fm, we spent a lot of time thinking about playback controls and sociality – there’s a lot you can infer from someone pressing skip frequently, or using the more explicit Love and Ban buttons Last.fm helped pioneer. Doing this experiment meant thinking about what happens when the listener presses skip – in a sense, they become a performer. Even with this little experiment, it’s quite nice to press the skip button in time, finding and making your own little rhythms.

Is it generative or modular music? Or both?
I remember fiddling around with programming generative music using Koan during my A-levels, and have always admired Brian Eno’s work with it. But during this little experiment, I didn’t want to spend my time just writing rules to generate music – I wanted to compose it. To author it. Is authoring a system the same as writing the notes? Need to think harder about this.

That’s all so far…
That’s pretty much it for half a day’s thinking. I’m sure someone somewhere has done this already, and far better than me. Even then, La Monte Young, Terry Riley or John Cage must have predicted and worked all this out 60-odd years ago, so I need to go away and read and listen to a lot of things, and see where the idea goes next.

Update: It did go somewhere next. Read more at www.musicforshuffle.com.